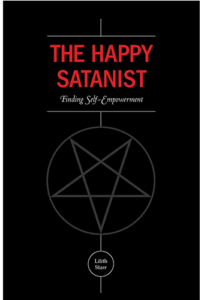 “I believe in individual liberty, and in taking it back from the hands of corporations and theocracy.”

Lilith Starr, founder of the Satanic Temple’s Seattle Chapter, adapted The Happy Satanist from her series of online essays in 2015, recounting her downward spiral into drug abuse and homelessness and how mainstream religion rendered her helpless against addiction, and then how love, the power of the self, and the appeal of Satanism made her the healthier and more powerful person she is today.

Half autobiography and half manifesto on Modern Satanism, Lilith’s story is highly singular and deeply personal. More than anything, it’s a valuable insight into the practice–not just the theory–of Satanism; it’s one thing to nod along with such ideas on paper, but what happens when they finally make contact with reality?

Note that this is intentionally the only book on our list written by an actual, practicing Satanist.The Happy Satanist references old Anton LaVey’s Satanic Bible more often than we ever would, but it was an important tool in the author’s personal journey–turns out a clock that stopped in 1969 really is right a few times a day.