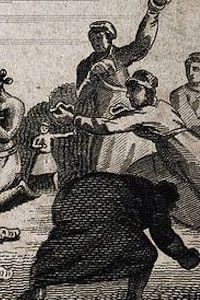 “There’s always been a Lottery.”

Life is changing outside of the small farming town at the center of Jackson’s brief, eerie 1948 suspense story, but here the townsfolk stick stridently by their oldest tradition: An annual rite in which they single out one of their own for mysterious purposes.

A sensation when first published in the New Yorker, outraged readers heaped “bewilderment, speculation, and old-fashioned abuse” on Jackson for months, but also turned the story into a classic.

Few things hold more awful or compelling power over people than tradition, and few written works expose the ruthless nature of that influence more effectively than “The Lottery.”

Every town, we’re told, has a Lottery–even those that have given up the old practice will soon realize that such prohibitions are “nothing but trouble,” the village old-timers assure us. And so it’s true: Every community feels the compulsion to create scapegoats, outgroups, and pariahs for their own special purposes. Even in the clear-eyed world of modernity, the whispery influences of long-dead minds exert mysterious influence over the mob.

In fact, the reading public’s very response to “The Lottery” when first published confirms its discomforting observations, as scandalized Americans pilloried Jackson but also couldn’t help but expose their gruesome fascination with her words.