Book: The Flowers of Evil 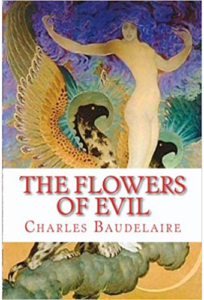 “Glory and praise to you, O Satan, in the heights of Heaven where you reigned and in the depths of Hell where vanquished you dream in silence.”

France’s greatest Modernist poet, Baudelaire was a tragic and melancholy figure with a reputation as a decadent and a dandy, and a not-so secret personal despair that led him to produce some of the beautiful but scandalous verses of the age.

The Flowers Of Evil engendered outrage and scorn with its subversive poems, and both Baudelaire and his publisher were put on trial and convicted for “insult to public decency.”

Baudelaire’s decadent verses heaped praise on the distaseful and the morbid while reserving contempt for the contemporary and bourgeois, climaxing with his remarkable and compassionate “Litanies of Satan,” which addresses the devil as a patron of the downcast and the unlucky.

And yet, despite his work being as intentionally alienating as possible, Baudelaire’s contemporaries could not help but acknowledge the superiority of his verses and be excited by the power and provocation inherent in his exploration of the seamy and the degraded.