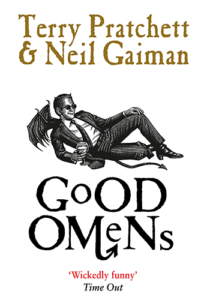 “If you stop telling people it’s all sorted out after they’re dead, they might try sorting it all out while they’re alive.”

The Apocalypse is such a persistent and silly cultural trope that it’s really time we start making fun of it more often.

British fantasy writer duo Terry Pratchett and Neil Gaiman penned this religious farce in which Heaven, Hell, the Four Horsemen, Satanic nuns, witch hunters, and real witches all do their damndest to make sure the End Times end up in their favor. But what if instead the world ends up getting to decide how it ends for itself?

No secrets here, Good Omens is just a really, really funny book. Some of the references and cultural tropes at the root of the jokes might go over your head–they did ours–but the witty, knowing, deadpan style of the prose is eternally endearing.

Good Omens is actually a very moving and effectual treatise on materialism and secular values. The authors’ abiding thesis is that material life on Earth right now is better and more valuable than eternity in any hypothetical paradise, and that the best possible course for the world is for people to be allowed to make decisions that benefit us in the here and now rather than the hereafter.