Book: Where The Wild Things Are, Maurice Sendak 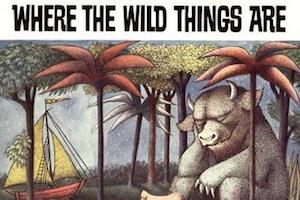 Kids are strange, but sometimes it takes the work of a similarly peculiar adult to remind us exactly how strange.

In this 1963 picture book about a grade-school deliquent who becomes king of an island full of monsters (Sendak originally imagined him running off with wild horses but discovered monsters are just easier to draw…), readers confront the raw animal power of ego.

This is the rare book for very young children that feels like it was translated from the mind of a child rather than an adult, and it bears all the hallmarks of early childhood, including a slightly alien self-assuredness.

Sendak’s award-winning but sometimes divisive story (many children’s libraries initially banned it) is about how we confront the unruly allure of our own ego, ultimately taming it and becoming more complete people not through denial but through both indulgence and self-discipline in turns.

And really, who doesn’t wanted to dress as a wolf and run off with monsters now and then? A more universally relatable tale has yet to be penned.