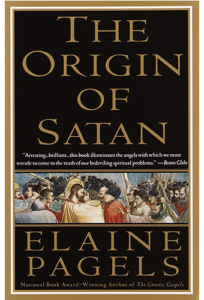 “Church leaders must not allow people to ask questions, for it is questions that make people heretics.”

The Hebrew Bible says almost nothing about Satan, but by the time the Gospels roll around he’s a full-fledged Prince of Darkness that readers are supposed to already be familiar with. So where did the myth of the devil come from, and why do those pages seem to be missing from the holy texts?

Princeton Professor Elaine Pagels unpacks the history of Jewish and Christian theology under the Romans to explain how ancient peoples developed the myth of Satan and employed it as their cultural go-to against political enemies, and how Satan eventually became the all-purpose avatar for anyone who needs demonizing.

This is a lot of Gospel and Apocrypha crunching for heretics like us, but Pagels’ book resolves a longstanding mystery about what the Bible does and doesn’t tell people about Satan and why folks believe these things anyway.

As it turns out, the devil was probably the creation of ancient religious extremists who needed a way to distinguish themselves from their enemies–both occupying Romans and mainstream Jewish sects whom the breakaway groups considered insufficiently zealous.

Pagels explains that Satan served as way to meaningfully distinguish groups from outgroups. What supposedly made one sect special, chosen, or correct in fractious Judean society? The allegation that everyone else was a tool of the devil, naturally.

Here we can see that the role and nature of the Satan myth has not much changed since 35 CE, as it’s always been a means of creating stigma and defining politically useful factional conflict.