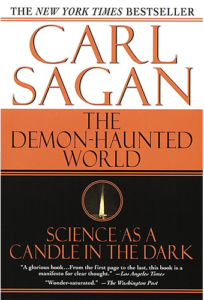 “If we’re unwilling to question authority then we’re just putty in the hands of those in power.”

In response to what he considered a groundswell of junk science and superstition, cosmologist Carl Sagan penned what for lack of a better term could be called a Bible for skepticism.

The Demon-Haunted World asks, why are we so easily fooled by hoaxes, frauds, and hysteria? What’s the attraction of bad ideas and how can we counteract it? How can ordinary people relate to science and the scientific method, and why should we trust it anyway? And at the end of the day, how can you really be sure what you’re sure of?

This book addresses directly, aggressively, and thoughtfully the most important of all questions: How do we ever really KNOW anything?

Sagan makes a rational and relatable argument for skepticism, and he endorses science as not just an academic tool but as something that can and should serve as guiding principle and a source of personal inspiration. More importantly, he stresses the necessity of challenging and questioning social norms and authorities–even scientific ones.

The book also contains his chillingly prescient comments about his “foreboding of an America in my children’s or grandchildren’s time when no one representing the public interest can even grasp the issues ad we slide, almost without noticing, back into superstition”–which effectively came true 20 years after his death.

On the other hand, The Demon-Haunted World is a bit dated now, and although Sagan is an affable and likeable guy he can sometimes sound arrogant or wearying when bemoaning America’s lack of scientific savvy, and his complaints about popular entertainment come off as stodgy and nagging.