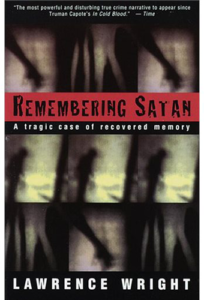 “For many religious believers, stories of Satanic abuse merely confirmed a worldview they already held.”

Of all the stories to come out of the Satanic Panic, none is stranger or more potent than the tale of Paul Ingraham, a small town cop and Republican politician who confessed to abusing his wife and children for decades as part of a secret Satanic cult.

But there was no cult, and those crimes never happened. Even so, Ingram confessed anyway; he believed he was guilty, he “remembered” doing it all, and he insisted on going to prison. New Yorker writer Lawrence Wright unravels the strangest of all family dramas.

Books like Satan’s Silence offer broad surveys of the anti-Satanism hysteria, but it’s still hard to imagine how someone could really believe such impossible things.

In Remembering Satan, Wright–who has also written best-selling books about Scientology and Al Qaeda and specializes in bizarre and self-destructive personal beliefs–dissects Paul Ingram’s confabulation and its many elements: the persuasive power of consensus, the misleading nature of memory, the way authority can override our own sense of self, and the manipulative and coercive nature of police interrogation.

Some mysteries will never be solved, but Remembering Satan comes as close as humanly possible to putting its finger on the insidious elements that brew witch hunt hysterias.

This book also references physical and sexual abuse. Although, once again, it appears in hindsight that most or all of these incidents never really happened, the descriptions may be more difficult for real trauma survivors to read about.