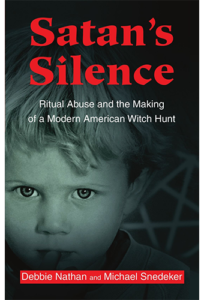 “The adults fashioned a subculture of fanatical belief that enveloped the children and demanded their total participation.”

As a journalist in Chicago and El Paso during the Satanic Panic, Debbie Nathan covered much of the scandal and fury firsthand, from the fear and confusion of the initial allegations through the surreal spectacle of trials and finally to the disquieting aftermath, when cracks in the stories about recovered memories, devil worshiping cults, and child abuse conspiracies became painfully evident.

In Satan’s Silence, Nathan and defense attorney Michael Snedeker provide one of the earliest and most vivid firsthand accounts of a modern witch hunt and its roots in societal anxiety, sexual shame, cultural xenophobia, and fundamentalist zeal.

There are lots of Satanic Panic chronicles, but Satan’s Silence followed fast on the heels of the phenomena itself, a time when many die-hard advocates still refused to give up prosecuting the urban legends of child-snatching devil cults.

Some of Satan’s Silence is now outdated, as the real scope of the disaster was still not entirely apparently in the ‘90s. But it’s a one of a kind, boots-on-the-ground account of how America was swept up into hysteria just a generation ago thanks to cultural fears about women, sex, and changing social values.

This book contains frank discussion of child sexual abuse, including sometimes uncomfortable descriptions of forensic medical tests conducted on kids as young as four or five.

Although virtually all of the abuse alleged in these cases turns out never to have happened, Satan’s Silence may be more difficult for those who have suffered real trauma themselves.