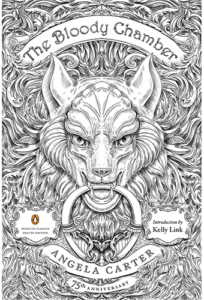 “We keep the wolves outside by living well.”

In this short story anthology, English writer Angela Carter strips popular fairy tales like  “Beauty & the Beast” and “Little Red Riding Hood” down to their basic elements to  explore themes of horror, Gothicism, taboo, bodily autonomy, and above all the roles of women in folklore and storytelling.

There’s no Satanism and only a little occultism in The Bloody Chamber.

But Carter’s fables serve as a brilliant lesson in subversion–inverting, undermining, or transforming the presumed themes, politics, and prejudices of popular stories to prosecute her own arguments and explore the inherent appeal of the outlandish and the macabre.

At the same time, Carter testified in a 1985 interview that her intent was “to extract the latent content from traditional stories”; in The Bloody Chamber, popular tales have always been preoccupied with power, agency, sex, cynicism, and taboos. The only thing that changes is our perspective–and ourdegree of honesty.