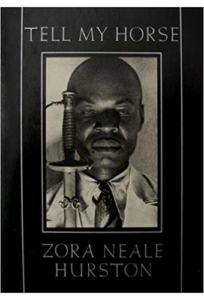 “Gods always behave like the people who make them.”

This travelogue by American novelist, playwright, and anthropologist Zora Hurston chronicles not Satanism but voodoo, another religion that’s frequently the victim of stereotypes, hasty generalizations, and societal prejudices.

Hurston chronicles her own travels through Haiti and the Caribbean, transcribing the practices of local communities and her own insights about the myths and ritual observations of the islands.

Other than some unfortunate stereotypes, voodoo and Satanism have hardly any overlap.

But Hurston’s book is a valuable resource because it illustrates a compassionate intellectual curiosity, revealing the highly humane and relatable heart of the practices she explores. The story of voodoo illustrates what happens when religion adapts to life under the worst of all circumstances.

If there’s a big problem with the book it’s that Hurston’s travel writing tends to be scattered, and there’s no particularly consistent style throughout. Critics have also noted that Hurston sometimes fabricated some elements of her non-fiction books, and it’s hard to tell when she might be employing creative license with some of these accounts.

OH BTW: Hurston developed somewhat conservative political opinions that modern readers probably aren’t used to hearing from Harlem writers–she did not favor desegregation or support the Civil Rights movement during the ‘60s, for example–so don’t take the recommendation of the book as necessarily an endorsement of her opinions about everything.