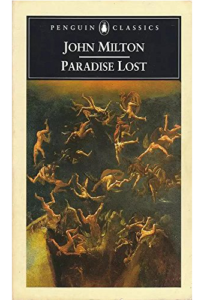 “All is not lost: The unconquerable will, study of revenge, immortal hate, and the courage never to submit or yield.”

The original Satanic classic, a 10,000-plus line epic poem recounting the story of Genesis with Satan as the protagonist. Over the course of ten chapters Milton tells how Satan revolted against god, was cast from Heaven, rallied his defeated troops to plot revenge, and conveys Sin and Death into the world.

Later English poet William Blake said that Milton was “of the devil’s party without realizing it,” meaning that although Milton was a stolid 17th century Protestant and Paradise Lost is mostly meant to reflect traditional religious opinions, almost without exception readers find Satan to be the most interesting, most sympathetic, and most humane character in the story.

Paradise Lost frames the devil as a revolutionary standing up to divine authority, and also as a complicated and fraught character whose personal conflicts, ambitions, regrets, and emotional nuances mark him as the earliest fully-realized devil.

Some readers do find Milton’s overflowing poetry opaque and hard to follow these days though. And although he ultimately turned Satan into a great anti-hero, this was probably by accident, and the poet’s priggish 17th century attitudes get annoying at times.