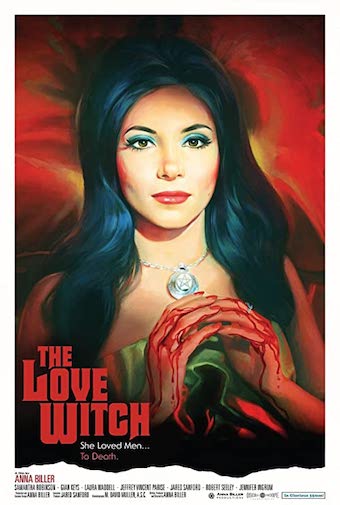 Fugitive witch-on-the-run Elaine comes to California hoping to be lucky in love, but her unyielding approach to both magic and relationships may spell disaster for everyone else.

In auteur feminist filmmaker Anna Biller’s The Love Witch, the titular sorceress says that in her opinion the best thing for men is to cater to everything they want and fulfill all of their fantasies–and in this way she ends up destroying them.

In an interview with Elle, she warns that this could go for audiences too: “I’m giving them very visual sexual fantasies,” she says, but what she’s really created is “a film about a woman who has been objectified and whose life has been ruined by it.” The witch, Biller says, is a stock figure for all of our strangest ideas about women: a femme fatale, a murderess, a scapegoat, a seducer, a poisoner, a keeper of secrets. In this fantasy there’s power for her…but also danger.

The Love Witch makes only fleeting reference to Satanism–it’s actually easy to overlook the movie’s one Satanist character–but Biller’s fantastical style of hyper-saturated technicolor, retro fashion, gauzy photography, and intensely self-serious acting captivates our interest. Maybe more than any other modern film, The Love Witch illustrates complete and total dedication to a powerful creative vision in a way that we frankly only wish we could match.