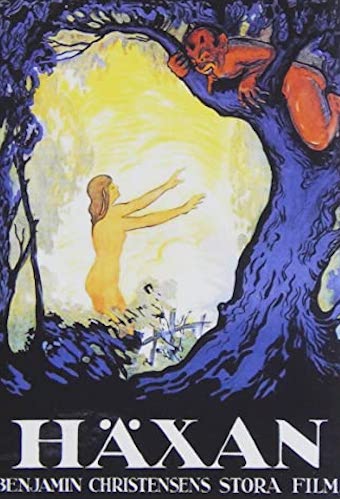 “Witchcraft through the ages.”

This sort-of documentary reenacts some of the world’s most curious beliefs and superstitions about witchcraft, even going so far as to create a surreal and lurid pageant of a devilish witch’s sabbat that still qualifies as one of the most bizarre (but beautiful) depictions of Satanic ritual ever committed to film.

Movie history is full of myths and tall tales about films so obscene that they were “banned” from distribution in certain countries, or even in every country. In almost all cases these turns out to be nothing more than rumor, and much of the time it’s the filmmakers themselves who began spreading the gossip in the first place, eager to cash in on the notoriety.

But Benjamin Christensen’s Haxan is the real deal, a movie that actually was driven out of theaters in some countries, at least for a time. Watching the film today, one suspects that it wasn’t just the scenes of flimsily dressed young women cavorting with the devil that provoked moral guardians, it’s the fact that they all really do look like they were having a good time shooting those bits–maybe TOO good of a time, if you get my drift.

Haxan is perhaps the strangest documentary ever conceived, for the simple reason that it set out to document things that in fact never happened. Christensen wanted to make an exposé about the history of witchcraft and devil worship, but of course, there IS no history of witchcraft and devil worship, at least not as people popularly conceived them in 1922.

The director’s solution: Since there were no real scenes of witchery to document, he’d simply make them himself. The result is, essentially, a film about an alternate world in which all of the most lurid superstitions of ages past appear in vivid and baffling detail, a world created just for the purposes of this one creative project and then, when it was over, made to disappear just as quickly. There’s arguably no other movie like–nor could there ever be. For being the wonderful freak that it is, we deem Haxan a truly Satanic film.