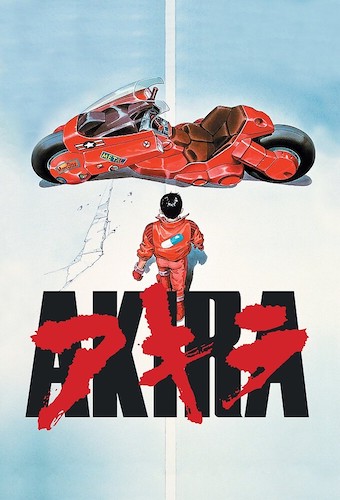 “Now you’re the boss: Of this pile of rubble.”

Katsuhiro Otomo adapts his own very long-running manga series Akira, about nihilistic teenagers in a dystopian future exposed to alien influence that might grant unlimited knowledge and power–or madness and destruction. The big hitch is, what if the only difference between those variables turns out to be the person in question?

When first released in the US in 1989, critics and film buffs praised Akira’s aesthetic and discussed its implications for the burgeoning Japanese animation market in the States, but many observers had relatively little to say about the movie’s contents. Possibly because the film is famously dense and difficult to follow.

The reason we qualify the film as Satanic Sinema is its focus on the characters’ sense of self. Tetsuo, who functions as both the antihero and villain of the film, achieves power beyond his greatest ambitions, but because of his own limitations he’s not able to do much with it except, ultimately, destroy himself.

Tetsuo’s ego is brittle, and this proves fatal to countless people around him. When exploring Modern Satanism’s emphasis on the self, new Satanists sometimes worry about the potential for selfish and destructive behavior, but in reality, neglecting your ego is just as effective of a way to stumble into toxicity and violence.

Watching Akira, ask yourself: What would happen to you if you could do anything? Would you have the discipline and self-knowledge necessary to preserve your sense of self? How can we come to know ourselves well enough to answer such questions?

Akira features some scenes of violent sexual assault, which actually are pretty gratuitous even by the standards of a film like this. Also, there’s some pretty goddamn gross body horror at the end; normally that’s not the kind of thing we’d think demands a content warning, but that should give you an idea of just how nuts it really gets.