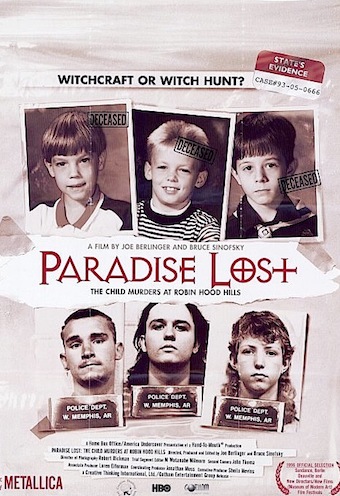 In this shocking and disquieting Satanic Panic-era documentary, a rural town in Arkansas suffers a truly terrible crime, as three young boys are found the victims of a graphic murder spree. The locals, naturally, blame Satan, in the form of three outcast teenagers on whom investigators pin the crime, but the real evil at the heart of this community is something altogether more banal.

This award-winning documentary by Joe Berlinger and Bruce Sinofsky is in a class all its own when it comes to Satanic Sinema for one very compelling reasons: While a lot of movies may talk about challenging arbitrary authority and standing up for the disinherited, this movie actually did it, on a scale few others can hope to manage.

When the two directors set out to document the trial of the West Memphis Three, they initially believed that the teenage defendants were guilty and that they’d be chronicling the tale of wayward youth who turned to horrifying criminality, perhaps even in the name of the devil, as so many in West Memphis seemed to believe.

Only in the midst of their work did Berlinger and Sinofsky come to conclude that, in reality, the trio were innocent and in the process of being railroaded, and their documentary work then took on much greater significance. While it took decades, the three accused teens eventually cleared their names and secured their release (one of them escaping the death penalty in the process), and although this is due to the hard work of many parties, it’s no exaggeration to say that Paradise Lost: The Child Murders at Robin Hood Hills was instrumental in saving their lives.

The film itself serves as a stirring (but disturbing) portrait of smalltown bigotry and of the quiet religious fanaticism that substitutes for a safety net in so much of modern America. The people of West Memphis believe they see evil wherever something dares not conform to their expectatations, but through the watchful eye of a camera, we the audience see the violence at the heart of their own bankrupt ideology.

Suffice to say, this film includes graphic details of the violent murders of three very young children, such that viewers who are not prepared for such material may find it overwhelming. Be warned going in.