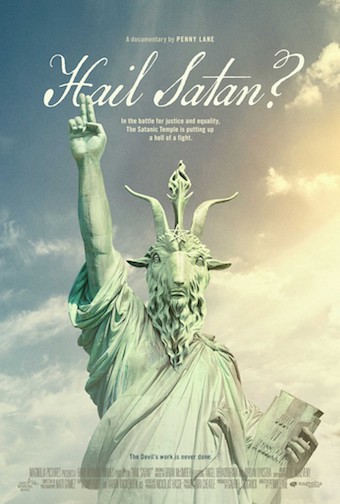 “We’re not what you think we are.”

This documentary chronicles the early years of the Satanic Temple, from its initially prankish origins through its growth and exposure to the mainstream and reckoning with just what kind of movement it wants to be, told through a combination of interviews and field footage of Satanists in action.

While there are a few other documentaries about Modern Satanism, most of them confess the same sins: Some are mere scaremongering and are devoid of any real Satanic materials, others are well-intentioned but ultimately amateurish, and some others are simply too obscure or opaque for general audiences to ever encounter.

Hail Satan? stands essentially alone in the field. Director Penny Lane’s acclaimed doc treats Satanism not as a novelty or an oddity but just as what it is: a tool for real people to create and explore a fully modern religious identity, through community, self-expression, and, in some cases, trial and error.

Chances are that this film is the only exposure that many audiences have ever had to actual Satanists and Satanic practice, and Lane was lucky to have access to Temple members during highly formative events that show the membership pondering what religion and religious identity mean in modern American discourse.

The movie does perhaps end up too preoccupied with chronicling public actions and could have dived deeper into the ideals and principles that motivate its subjects. But even as it stands, it’s a rare artifact simply for what it presents: Satanists as people living their lives, a perspective that’s usually completely hidden from non-Satanists.