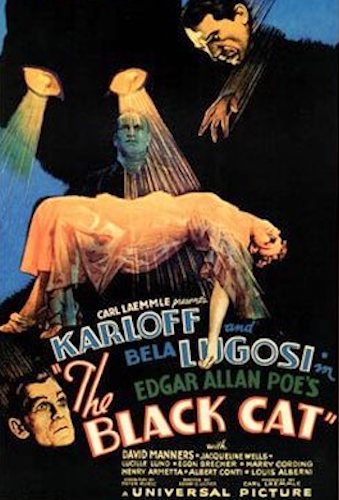 “Did you ever hear of Satanism?”

This Depression-era horror thriller from Universal presents a campy but sadistic tableau of devilry and revenge, as Dracula star Bela Lugosi launches a campaign of reprisal against his archenemy, a murderous Satanic priest played by none other than fellow monster movie great Boris Karloff.

While it may seem campy today, director Edgar Ulmer’s Satanic thriller The Black Cat was remarkably provocative for its time, delivering murderous cults, serial killers, corpses preserved in glass coffins, and even a scene where a man is strapped to a rack and skinned alive. That effect admittedly doesn’t look very convincing, but this was almost certainly the very first skinning scene in Hollywood history, so the bar was low.

And although a few previous films had referenced Satanism, rare was the pre-code movie that invoked the devil so flagrantly as this, establishing a long lineage of movie cults that meet in secret, wear sinister black robes, chant unintelligbly, and ritually murder virgins. In fact, Ulmer and screenwriter Peter Ruric based The Black Cat very loosely on the scandals of Aleister Crowley.

The Black Cat was gruesome and lurid, with gorgeous black and white photography and striking art direction, and it was a huge hit with ’30s crowds despite the morbid subject matter. In fact, the success of exploitative horror films like this is what provoked the era of Hollywood studio censorship that followed.

Often, non-Satanists and Anti-Satanists will try to shame or stigmatize us for employing images or aesthetics that other people find strange or disturbing. But the enduring popularity of horrific entertainment like The Black Cat exposes the truth: that MOST people are attracted to ideas that polite society deems taboo. Affinity for the strange or the macabre is entirely natural–whereas prudish attempts to censor such ideas are themselves unnatural.