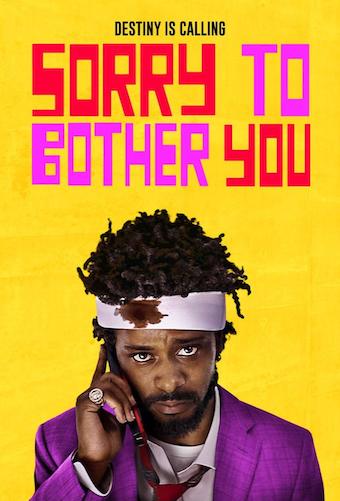 “If you get shown a problem, but have no idea how to control it, then you just decide to get used to the problem.”

Communist filmmaker and Oakland native Boots Riley created this weird but acclaimed surrealist comedy about Cash, an East Bay everyman who falls into favor with an eccentric tech billionaire who seems to offer him a big break. All he has to do is…not care about the consequences.

Critic Zehra Phelan called Sorry To Bother You a “completely unhinged, ethereal take on corporate manipulation and slavery, class prejudices and racial perceptions” and anxiously praised it as both “refreshingly original” and “terrifyingly insane.”

She might even have understated the movie’s sheer potential for divisiveness, but for our part we think that a film with this sort of uncompromising attitude about the status quo is almost Satanic by default. A lot of us talk about the revolutionary spirit of the Satanic ethos, but it’s rare to find such an unvarnished example of the principle in action.

More than religious or even political forces, the greatest institutional obstacle that a Satanist faces in the 21st century is the papacy of money, private industry, and corporate hegemony. Riley’s wildly leftist take on labor and the inherently inhumane (and racist) nature of capital is like a bomb that blows a thousand half-hearted lesser critiques completely away.

Beyond the theme of the film, the very fact that it exists at all is a powerful lesson in the nature of praxis. Riley’s movie is anti-capitalist, and yet it does exist as a product in a capitalist marketplace, one that made money for a number of interests–including of course for Riley himself.

This opens up both the film and the filmmaker to disingenuous criticism, and he could well have chosen to forgo the conventional  movie-making process out of fear of that. If he had, he might have better satisfied someone else’s vaguely defined expectations…but probably nobody would have seen the film.

Instead he made sure it reached the widest audience, and it’s hard to argue this wasn’t the most effective approach. At the end of the day, you can’t let the nature of the world itself bully you into never doing anything about it.