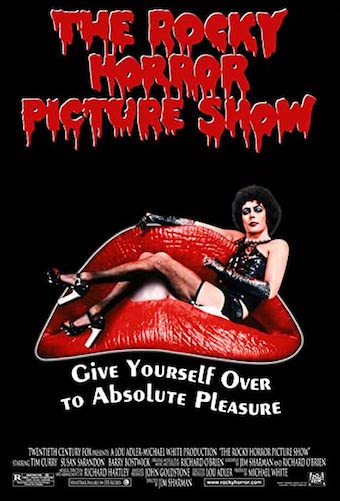 Based on the cult hit stage show, Rocky Horror ostensibly serves as an homage to B-movies and the science-fiction double features of a latter age, relating the unfortunate tale of young lovers who stumble into the clutches of a mad genius, as told through the medium of rock & roll.

Honestly though, the plot is wildly unimportant to your enjoyment of this film, and is not even close to the reason we like this movie–read on.

Lots of movies are labeled cult classics, but Rocky Horror is maybe the only movie that can apply the term literally. Multiple successive generations of Americans have experienced the rite of passage of a midnight Rocky Horror screening, during which you will join and witness the truly remarkable subculture of Rocky devotees/obsessives.

Since most Satanists are atheists, often the general public expresses surprise or confusion that so many of us still participate in Satanic ritual, mistakenly believing that theism is a requisite for ritualizing. In reality, secular rituals are very common in day-to-day society–but none of them are so involved, so enduring, and so profoudly powerful as the weird shit that goes on at nearly every single showing of The Rocky Horror Picture Show.

Some fans attend screenings every month, while others stop by only a few times a year or less–but either way the screening represents a communal bonding experience that serves the same utility as a church service for more conventional demographics. Few churches involve quite this much T&A, repeated chanting of the word “asshole,” or projectile food…but to each their own.

However, in recent years the property has attracted mores scrutiny for promoting negative stereotypes of genderqueer and pansexual people as predatory, perverted, and dismissive of other people’s boundaries or agency. To be honest…yeah, yeah that’s definitely part of the text of the film, and it’s not ideal.

A lot of Bay Area Satanists are huge fans of Rocky Horror in spite of this, but we’d also like to be sensitive to Satanists who fret that the movie undermines the same values so many other people read into the film itself. Sometimes it’s hard to know how to balance those variables, but we can at least frankly discuss them.