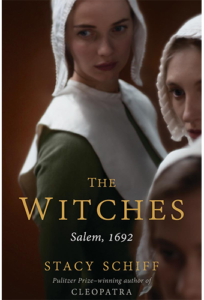 “In this place they would establish Satan’s Kingdom, where his recruits could expect happy days.”

The Essex County witchcraft scare of 1692 in and around Salem, Massachusetts reveals that certain ideas have always haunted America’s colonizers and their descendants: fear of the devil, fear of conspiracy, and most of all fear of persecution by enemies who are anonymous and invisible but somehow no less real for it.

Pulitzer-winning biographer Stacy Schiff chronicles the sordid affair, from its roots in the strange affliction of a minister’s family through the theocratic crusade that executed 20 people for crimes that are impossible to commit–the wages of letting religious extremism becomes the norm.

European colonizers of New England believed that the devil was constantly harassing them, that nearby native tribes and enemy states alike were agents of Satan, and that persecution by evil powers lay at the root of any misfortune that befell them.

In Schiff’s account of this period we see the theology, prejudices, conspiracy-think, and cultural paranoia that persists in America to this day, and are reminded of the terrible consequences of allowing religious zealotry to become the predominant force in society.

Some critics have criticized Schiff for factual errors, and the book tends toward a stream of consciousness style that’s distracting at times. But although it’s not the most straightforward account of the history, but it is one of the ones with the least amount of baggage for modern readers.